All Paws on Deck 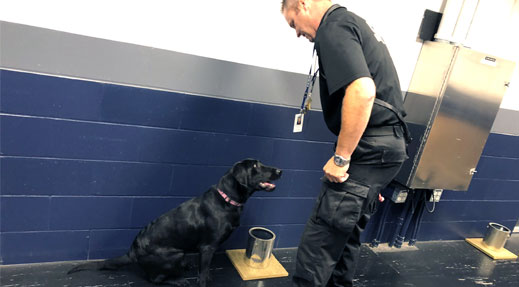 It will soon be all paws on deck as the black Labrador Retriever pups who joined True North’s security dog team last year, prepare to work like the big dogs at hockey and entertainment events at Bell MTS Place.

Triplets Grace, Ryp, and Lenny joined True North’s security dog team last fall as new recruits and just celebrated their first birthday on September 3 (or seventh in dog years). At only six weeks, trainer and handler Dave Bessason, a former Winnipeg Police Service (WPS) canine officer, and his team started socializing the dogs as a first step in preparing them for their future duties.

“The biggest thing with a young dog is socialization,” said Bessason just before running Grace and Ryp through drills for their very first time at Bell MTS Place. “Getting them used to people, sounds and slippery floors is very crucial for a detector dog down the road.”

After several months of familiarizing the dogs with the venue, Bessason began fine tuning their sniffing skills using an obstacle course of cans and scents to teach the dogs to recognize certain odours. Through these tactics the dogs have been conditioned to detect these odours, but had not yet run the drills at Bell MTS Place.

“We’ve taught the dogs along the way, little steps, you get a reward,” said Bessason describing Pavlov’s classic conditioning methods. “Now they piece it all together – they recognize odour, they know how to search for odour, they know the action is a sit and that stimulates a reward. Now that they know this we can really start our formal training.”

In the coming months and after they get used to doing the can drills in the venue, training will progress to virtual reality without the cue of cans.
“We’ll start hiding odours in real life situations and will introduce more odours,” described Bessason.

Before the end of the 2018-19 season, the dogs will share shifts with Daisy, the veteran of the group, as Dante, now nine-and-a-half, prepares for retirement.

Having worked with dogs from the same line before, Bessason knew that this strong genetic background would offer the best dogs for the safety and enjoyment of all who attend events at Bell MTS Place. Since their puppy days, Grace, Ryp, and Lenny have been demonstrating the strong character, instincts, and drive needed to be a top protective performer.

“You will see the dogs with the ball in their mouth – they’re crazy for it. When you have the genetics and the drive of the dog, then we can really mould them into the behaviours that we want.”

Twenty years ago, police service dogs were not approachable but the line of police and detective work has evolved and it’s important to Bessason that the dogs are social and that fans can interact with them at events, as long as they are not visibly working.

“When people come up, just make sure you ask ‘can I pet your dog?’, then by all means,” he said also encouraging patrons to do just that. “The majority of our work is done prior to anyone showing up (at Bell MTS Place), but it’s important to be on hand to search anything suspicious.”

And how did our furry friends do on their first day of on-site training? Aside from a few unavoidable puddles, Bessason gave everyone an A-plus which, after all that he has put into their training, is gratifying and a big part of why he has grown so passionate for his specialty role, first in with the WPS and now with True North.

“When you can train the dog every day and they’re happy to see you and everybody loves dogs, it’s rewarding. You get the dogs at six weeks and you see them now after a year, and you see them six months from now after they mature and they know the game. It’s nice to see that progress.”

So, don’t be shy when you see the dogs at Bell MTS Place. Although built and trained for a hardcore job, their warm hearts and cold noses need affection too.