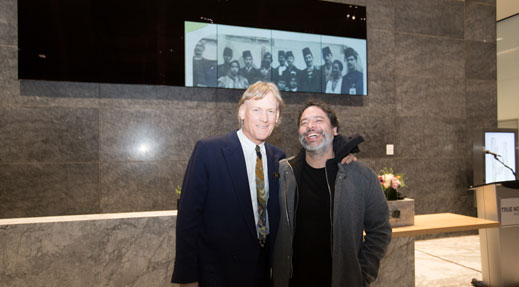 The lobby of any public building is meant to be a place that is alive with the action of people gathering. The lobby of 242 Hargrave at True North Square is no different, and that will now be reflected in a new multimedia art installation that is both dynamic and that will put a real focus on the people of our city and country.

Not surprisingly, the inspiration for an art installation in the 242 Hargrave lobby came from the very idea of bringing life to the space. True North Sports + Entertainment Executive Chairman Mark Chipman knew the space needed something added to it, but also knew that he wasn’t the person to determine exactly what that would be.

“What I don’t know about art is a lot,” joked Chipman at a reception to unveil the art feature. “What my good friend David (Thomson) knows about art is literally unparalleled on this planet. So, I’m not that smart, but I’m smart enough to say maybe I should give David a call and get his thoughts on how we can bring this lobby to life.”

From the outset, David Thomson, media magnate and business partner of Chipman, felt that in order to bring the lobby to life the installation shouldn’t be static, and it needed to include people.

Those notions led him to the idea of using a series of photographs.

“The human condition, the essence of who we are comes through so clearly in photography,” said Thomson. “It struck me that if there was a way in which the city, province, and country could be portrayed in an ever-shifting and moving series of frames that were governed by our feelings rather than some natural, almost tectonic world.”

Following that thread further, Thomson conceptualized the combination of photo archives of the Winnipeg Free Press and The Globe and Mail as a great starting point for a catalogue of photos which could be used.

From there, he commissioned his friend David Medina, an artist and computer engineer from Columbia who had previously helped him with an art archive in London. The goal was to create a living art installation that would reflect those ideas of the human connection through photography in an ever-shifting display.

The installation that Medina came up with, titled An Eye Opened to the Wind and the Sun, went above and beyond those ideas. Though the 14,000 photographs from the Winnipeg Free Press and The Globe and Mail already offer a great connection to the city, Medina heightened the local connection of the display by creating an algorithm that would dictate the photos’ movements and tone according to wind speed and the position of the sun in Winnipeg. The algorithm takes wind records dating back to 1953, with the wind speed affecting the speed at which the photos change. Meanwhile, the position of the sun influences the brightness of the screen.

The feature serves as a great example of how great a connection there is between the people and the elements in Manitoba, which is a fact that struck Medina upon first visiting Winnipeg during pre-production of the piece.

“The human spirit really meets this kind of environment of force with nature,” remarked Medina. “It shows so much about the human spirit of Canadians, and the spirit of the people in Winnipeg.”

Medina hopes that spirit shines through, both in his art feature and in the lobby itself.

“The lobby is used by many people, and when I was doing the pre-production, I talked to many people from many different parts of society. It’s an amazing example of life in Winnipeg.”