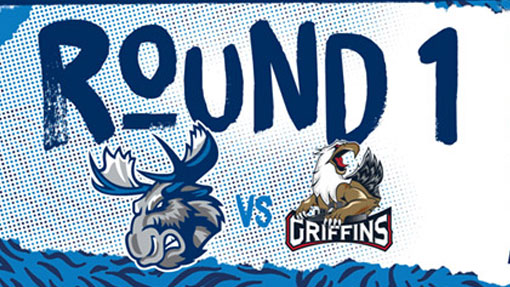 The AHL Calder Cup Playoffs are coming to Bell MTS Place, with the first two matchups of the best-of-five series taking place this weekend as the Manitoba Moose take on their long-time rivals, the Grand Rapids Griffins, at 2 p.m. CT on both Saturday and Sunday, April 21 and 22.

Fans can “Let Loose” in the fun family atmosphere, where playoff tickets remain an incredible value for a family or group event. Starting at just $23 (plus fees) for the first round of playoffs, Moose games are the perfect all-around entertainment event for everyone from hardcore hockey fans to students, families, teams, clubs, and organizations.

Manitoba Moose playoff games provide an opportunity to catch Winnipeg Jets prospects on their way to becoming the next wave of NHL stars in a fast-paced AHL playoff atmosphere. This season, nine players have spent time with both the Moose and the Jets, and the on-ice success the Moose had in the regular season did not go unnoticed by the league.

The Calder Cup has a rich 81-year history of teams vying for its coveted honour with its winners including Hockey Hall of Famers as well as Stanley Cup champions.

On three occasions, an AHL club and its NHL affiliate won their league championships in the same year with teams reaching both the Calder Cup and Stanley Cup finals on two other occasions.

Tickets for Game 1 and Game 2 of the Central Division Semi-Final series between the Moose and Griffins are on sale now at moosehockey.com/tickets.

Be sure to arrive early to be one of the first 5,000 fans to receive playoff clappers to help cheer on the home team on April 21.

First-time fans can learn more about the excitement of the Manitoba Moose family atmosphere with our 10 Tips guide by clicking HERE.