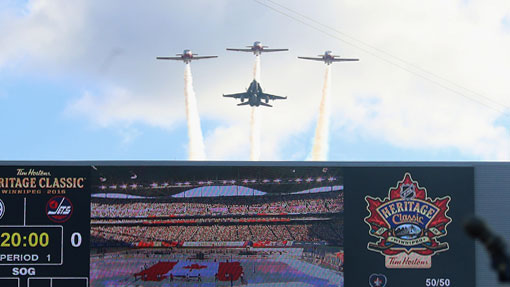 Two Royal Canadian Air Force (RCAF) CF-18 Hornet fighter jets from 4 Wing Cold Lake, Alta. will conduct a flyby over Bell MTS Place and the Winnipeg Jets Whiteout Street Party to mark the Winnipeg Jets’ first home game of the second round of the Stanley Cup playoffs. The flyby will take place at approximately 7 p.m. CDT on Tuesday, May 1.

The aircraft will fly over the arena at an altitude no lower than 500 feet above the highest obstacle on their route. Flybys by RCAF aircraft are carefully planned and closely controlled for public safety, and are dependent upon weather and flying conditions.

The RCAF and the Winnipeg Jets share a connection through the team’s crest, which incorporates the RCAF’s roundel and a stylized fighter jet. The True North Youth Foundation also makes an annual donation to support military families and veterans. To learn more about the foundation, please visit www.tnyf.ca.

The CF-18 Hornet is the RCAF’s frontline multi-role fighter, and is employed in many different roles, including air defence, air superiority and tactical support. One Hornet is also used for the annual demonstration program, and this year, the theme of the CF-18 Demonstration Team commemorates the 60th anniversary of NORAD, the binational American and Canadian partnership that defends the airspace of both countries.

The RCAF is proud to share in national sporting events such as this, with flybys that allow us to demonstrate the capabilities of our personnel and aircraft to Canadians.

For details on the Royal Canadian Air Force and our aircraft, please visit the website at:
www.rcaf-arc.forces.gc.ca.

This article was a Public Service Announcement by the National Defence / Canadian Armed Forces.