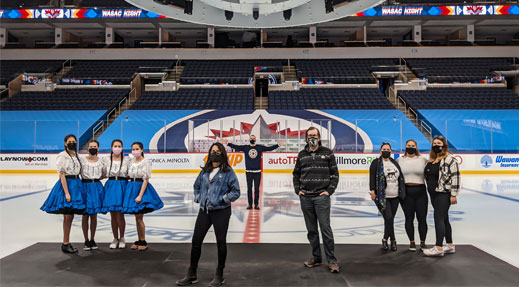 The Winnipeg Jets WASAC Night and accompanying initiatives have always been about much more than a display of appreciation for Indigenous culture in Manitoba. The partnership between True North Sports + Entertainment and WASAC (Winnipeg Aboriginal Sport Achievement Centre) has always been about building relationships.

Over the years, these relationships have continued to grow, both through opportunity and creativity. The latest creation is an animated video to accompany the territorial acknowledgement read before every Jets and Manitoba Moose home game. The new imagery complements the meaning behind the words and is hoped to generate more curiosity and learning about Indigenous cultures.

“To this point, we’ve used the same graphics package that we use for the singing of O Canada,” said True North’s Director of Creative, Josh Dudych. “There was an opportunity to become more specific and more appropriate in representing the Indigenous people that were here before Canada was a country.”

The presentation that debuted at the Winnipeg Jets third annual WASAC Night on April 24 is visually stunning in its representation of the First Nations, Métis, and Inuit cultures, but the sharing that took place to create it holds as much, if not more significance.

In the same way that True North originally involved Cree graphic designer Leticia Spence in the indigenized Jets and Moose logo design process, Dudych and Spence knew this project wouldn’t be authentic without including the creativity and perspectives of people from the Métis and Inuit cultures.

“It was important for us to have actual people representing their nations, and include their voices into the graphics that were designed to ensure that everyone is represented and that they have a say in the elements and symbolism that they want to be represented in,” noted Spence.

To do that, they involved Nikki Komaksiutiksak and her two daughters who are of Inuit heritage and perform throat singing, as well as Jessica Lavallee and her grandmother, younger sister, and two cousins who brought Métis culture through their experience in performing traditional jigging and square dancing. In addition to Spence, who grew up around beadwork through her family, Kylie Sais represented First Nations culture, also through beading.

Research, discussions, and brainstorming were key to the creative process, but the most important aspect of the group’s collaboration was the fact that they met to share their cultures with each other – safely gathering at Bell MTS Place to perform throat singing and jigging and create a greater understanding of each other’s heritage, as well as share in each others’ spaces.

The opportunity to encourage teaching and learning through a shared cultural experience made the process truly meaningful for Lavallee and Komaksiutiksak.

“For me, it’s uplifting because I’m teaching people about my culture and things they never knew about,” said Komaksiutiksak, who serves as executive director of Tunngasugit, an Inuit resource centre in Winnipeg.

“I was super appreciative to be involved in the process, not only to share my thoughts, but to learn,” added Lavallee, a recent criminal justice degree grad who works with the Manitoba Human Rights Commission and volunteers on the board of WASAC. “During this project, I learned a lot from the other people involved.”

Another level of significance for the project was the involvement of women. Many of the art forms represented in the territorial acknowledgement imagery would have been passed down through the generations by women.

“Historically, women in Indigenous cultures were the matriarchs of their communities,” noted Komaksiutiksak. “We had myself and my two daughters involved, the Lavallee family with a grandmother with daughters and grandchildren representing the Métis, and Leticia being an Indigenous woman and spearheading how this imagery is going to look. It was a beautiful process.”

“Many Indigenous societies were matrilineal, and women held more positions of power and leadership within community government and were more central in spiritual ceremonies prior to colonization,” added Spence. “Over time, though, there’s been a disconnect with that. We wanted to showcase the importance of women in societies, and how these arts that are representative of Indigenous cultures have often been driven by women.”

The video represents those arts both visually and sonically. For the Inuit, those arts include throat singing, a qulliq (an oil lamp used for heat and cooking in igloos) and kakiniit/tunniit, a form of traditional tattooing generally practiced and received by women that is sacred in nature and is a source of cultural pride. Floral patterns and square-dancing formations represent Métis culture, while First Nations art was represented through beadwork and quillwork patterns and drumming.

“We were able to weave the different pillars of Indigenous culture together through a visual representation, and that through-line is different geometric patterns, said Dudych. “The patterns are interesting because they are at the same time abstract but also very representational. Each of these designs have significance to each culture.”

All those traditions have been passed down from generation to generation, which made it important for the group to include both elders and youth in the collaboration.

That combined focus on the role of women in Indigenous cultures and the importance of carrying on traditions through the generations held particular significance to Lavallee.

“For myself, my grandma is the one who introduced me to the traditional Métis jigging. I feel that I now have a role in ensuring that the younger generation of my family learns that traditional jig-step. For Nikki, she was doing throat singing and contributing to the discussion about Inuit culture with her daughters. Just having that background of people involved was super important.”

As with any relationship, trust and respect were crucial throughout the design process and all participants felt they were truly listened to and made a meaningful impact on the presentation that debuted April 24.

Now the group hopes the product of their efforts fosters more cultural sharing like they themselves experienced throughout the process of conceptualizing the new visuals. The graphics, like the words they accompany, aim to spur on even more relationship building between cultures and communities.

“People seeing this image are going to wonder, ‘what is that?’,” noted Komaksiutiksak. “Once people do research, they’ll learn more about our culture and our people.”