Rescue to Security: The Rocky Story 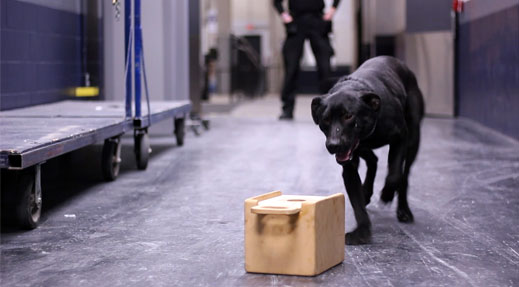 Three times he was passed over by different owners, but now it seems he’s finally found his forever home at Bell MTS Place.

Rocky, a Black Labrador/Pit Bull mix, the newest recruit to True North Sports + Entertainment’s Security Dog Program, was found through the Manitoba Mutts program and according to his boss, he was born for this line of work.

Dave Bessason, Security Dog Handler and Trainer for True North, has been testing dogs for 30 years and he says Rocky, now 15 months old, “ranks in the top three that hasn’t had any training based on straight ability.”

Bessason put out calls across Manitoba looking for dogs that might be suitable for the
high-stress job. Rocky came in underweight and with lacerations covering his face and snout. Bessason was looking for a dog with energy and drive and Rocky was looking for someone, somewhere to take him in and save his life. It was a perfect match.

“It takes a lot for a dog to meet what we need to work in the real world and once I saw Rocky, I knew he had what it takes,” says Bessason.

According to Bessason, Rocky already has a leg up on other dogs he’s tested but there is still some training to go through before he is officially put on patrol at Bell MTS Place.

“For the past six weeks we’ve had to run him through a lot of environmental training. He had issues with see-through stairs and noises that he wasn’t used to.”

Bessason says it’s crucial for Rocky to be environmentally sound before they move on to odour detection.

Rocky still has about two to three months of training ahead of him but one area that no one is concerned with is his energy. His boundless energy is the reason three families struggled to control him as pet, but it’s also the reason he’s the ideal security dog.