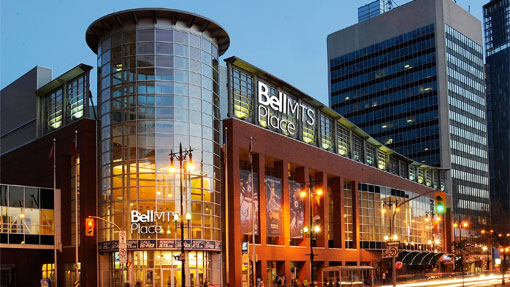 True North Sports + Entertainment and Bell MTS are pleased to announce the renaming of the home ice of the Winnipeg Jets and Manitoba Moose to Bell MTS Place. The arena hosts over 140 events annually and is consistently recognized as one of the premier sports and entertainment venues in North America. Additionally, True North’s hockey training facility with four NHL regulation size rinks (also used by the Jets and Moose) will be renamed to Bell MTS Iceplex.

Bell Canada launched Bell MTS following its acquisition of Manitoba Telecom Services (MTS) in March, and has been quickly establishing the new name of Manitoba’s leading communications provider throughout the community.

“Bell has a made a strong commitment to Manitoba with the launch of Bell MTS and its significant investment plan for the province,” says Mark Chipman, executive chairman True North Sports + Entertainment. “We’re excited to work with Bell to explore an enhanced partnership to the benefit of Manitobans and both companies in the months ahead.”

“MTS built a great relationship with True North Sports + Entertainment and the Winnipeg Jets, and the Bell MTS team is excited to take this successful partnership forward,” says George Cope, president and CEO of Bell Canada and BCE. “We’re proud to have our name on a place that’s recognized for delivering one of the best sports and entertainment experiences in Canada for fans, and a community facility that serves as a hub of Manitoba hockey development.”

Bell Media is also a major media partner with True North, owning the regional broadcast rights on TSN for the Winnipeg Jets in Manitoba, Saskatchewan and northwestern Ontario.

While Bell MTS Place and Bell MTS Iceplex names are effective today, it will take a number of weeks to replace the signage currently in place throughout both facilities. True North estimates that all new signage will be in place by September 1.