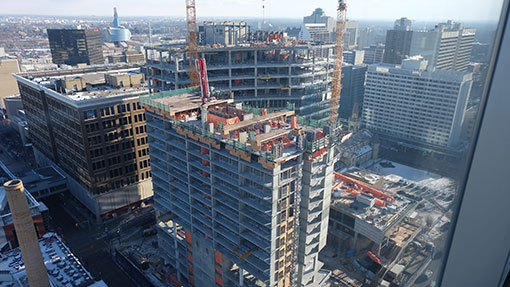 True North Square has reached a significant construction milestone with the official topping-off of 242 Hargrave, the development’s mixed-use retail and office tower. As of December 2017, the tower has reached its final height of 17 storeys.

“This top-off was scheduled more than 18 months ago and PCL delivered – that’s exceptional,” said Ludlow, acknowledging the longstanding partnership that True North has had with PCL as builders of Bell MTS Place, and now, True North Square.

In addition to diverse construction work, the architecture itself is also quite complex with the building curving and twisting as it gets higher.

“This has been a complex project because of the intricate design of the buildings and the multiple aspects that are being built at once – a series of schedules, and a series of construction jobs are all happening at the same time,” said Ludlow referring to the simultaneous build of the two towers, underground parkade, public plaza, and skywalks.

“PCL eagerly took this project on, knowing of its complexities. It’s been a herculean task and a yeoman’s effort from those folks to ensure that we stay on schedule and meet all of our obligations,” said Ludlow.

“PCL is proud to have the opportunity to construct True North Square for our client TNRED,” said Sean Barnes, Vice-President & District Manager at PCL Constructors Canada Inc. “We are delighted to see the progress of both towers as TNRED redefines downtown Winnipeg with this transformational, placemaking development.”

Installation of the high-performance, triple-glazed glass curtain wall on 242 Hargrave began in September and will be completed in January 2018. The building will be weather tight in the new year which will allow the floors to be finished for True North Square tenants. Construction teams are on schedule to deliver building occupancy for Tower 1 by June 29, 2018.

“We expect to be with PCL on July 1, 2018 cracking the next bottle of champagne over the ribbon that will be cut as tenant number one walks into this building,” said Ludlow.

Tower 2, 225 Carlton, comprised of boutique offices and high-end residential units, has reached 18 of 25 storeys and will be completed by spring 2019. Construction of towers 3 and 4, Sutton Place Hotel and Residences at the northwest corner of Carlton Street and St. Mary Avenue, will break ground in spring/summer 2018.