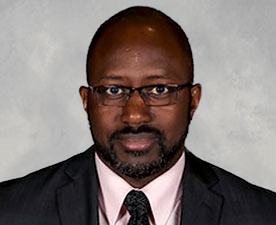 Linzy Jones joined True North in 2004 holding various roles in sales, customer service and ticketing leading to the return of the Winnipeg Jets in 2011 when he assumed the role of Director, Ticket Sales & Service. Jones was instrumental in the execution of the “Drive to 13,000” campaign which saw the Winnipeg Jets sell out of season seat holder packages in just seven minutes. In 2013 Jones coordinated the launch of the Winnipeg Jets loyalty program, Jets Rewards, and in 2018, as Sr. Director, Ticket Services & Operations, Jones managed the Jets’ transition to digital ticketing. Jones was named Vice President, Ticket Sales & Operations in 2019.

A life-long Winnipegger, Jones attended the University of Manitoba and also completed Robertson College’s Radio and Television Broadcasting program. Before joining True North, Jones held roles in broadcasting and sales. He has volunteered his time as a soccer and basketball coach for more than 20 years and, along with wife Leanne, Jones continues to be involved in sports with his young daughters Livia, Eden and Paige. In his spare time, Jones enjoys golfing and singing.