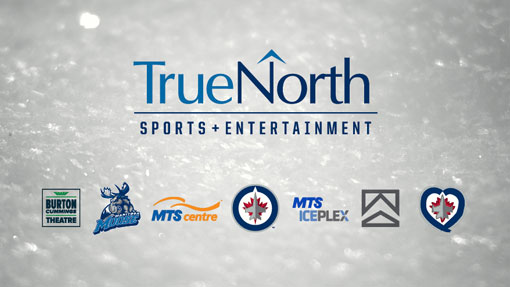 In front of an audience of employees, players, and corporate partners at True North Sports + Entertainment’s annual corporate partner reception at the Royal Aviation Museum of Western Canada on Mar. 1, 2017, Executive Chairman and Governor, Mark Chipman shared a few summary points from a new KPMG report commissioned by True North to measure the annual economic impact of its operations in Manitoba. The study found that True North’s activities:

Additionally, the Winnipeg Jets and Manitoba Moose, combined with activity at True North’s venues including the MTS Centre, the MTS Iceplex, and the Burton Cummings Theatre, attracted over 135,000 out-of-province visitors. The guests to our province include visiting teams, fans, artists, promoters, and concert-goers. The KPMG report measured dimensions of True North’s 2015/2016 economic impact including value added (GDP) or wealth generated in the economy, jobs, and government revenue.

Now in its 20th year in business, True North’s economic impact assessment provides its stakeholders a measurement of the company’s contribution to the Manitoba economy. “Growing an organization that contributes $210-million to the provincial economy could not have been done without the support of our employees, fans, corporate sponsors, public partners, and so many others in the community who have been with us every year,” says Chipman. “As an organization, we are extremely grateful.”