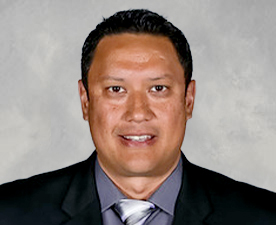 Dorian Morphy, a marketing graduate of the University of Manitoba’s Asper School of Business, has been involved with True North Sports + Entertainment since inception, joining the Manitoba Moose in 1996. In that time he has held a variety of leadership roles in the areas of ticket sales, marketing and ticket operations. Leading up to the announcement of the return of the NHL to Winnipeg in 2011, Morphy played a prominent role in the creation of the “Drive to 13,000” season ticket drive. Later that summer, he led the process for the creation of the new Winnipeg Jets logos, jerseys and brand identity.

In his current role as Vice President, Marketing, Morphy is responsible for the advertising and marketing efforts for all True North brands, including the Winnipeg Jets, the Manitoba Moose and True North venues. He provides leadership in the areas of digital media, creative services and visual media,  and oversees the development of True North’s retail operation, Jets Gear, which has grown to five locations and an online portal, TrueNorthShop.com.

Morphy volunteers his spare time coaching for the Bonivital Soccer Club. He and his wife Kim have two children, Kaitlyn and William.